This article contains facts about oceans. The oceans cover a majority of the Earth's surface. Scientists are just starting to understand this part of our planet that is larger than the land areas. The location of the oceans have changed over time. Sea life fossils have been found on almost every land area in the world, including on Mount Everest near the highest point on Earth. 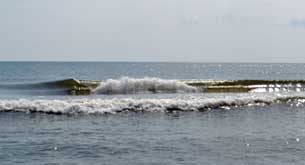 Ocean View From The Beach

Viewing the water at the bottom of the ocean looks like tiny particles floating, then settling on the floor. These particles are from erosion of material on land, disturbance from waves near the beaches, pollution and volcanic ash from the sky, and decaying animals in the water. Over time this sediment has built up. In some areas, such as the Atlantic Basin, the sediment is over 10,000 feet thick! Scientists are currently studying the sediment at the bottom of the ocean to try to find out more about our planet. 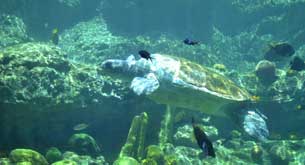 Sea Turtles live in the Oceans

There is abundant life in the oceans. Many different sea animals like sea turtles, sharks, dolphins and whales all live in the oceans. There are so many different animal and plant species in the oceans, scientists do no know the exact number. It was once thought that plants and animals did not live at the great depths of the oceans, but now we know this is not true. Within the great unknown oceans, scientists guess that between several hundred thousand to over several million different plant and animal species live.

The oceans of the world are very important for life on Earth. Not only does aquatic life thrive in the world's oceans, but life in the oceans also support life on land. A tiny organism, too small to see without a microscope, called a phytoplankton, produces 80 percent of the oxygen in our atmosphere through a photosynthesis process. The phytoplankton lives near the surface of the oceans. They use energy from the sun to produce oxygen and sugar from carbon dioxide and water. People and animals also rely on plants and animals for food from the oceans.