Learn some interesting facts about the ray, which is a quite interesting sea animal. Sea rays are the closest animal to the shark in terms of biology. Stingrays are often featured in touch tanks for kids at aquariums, mainly because with their stinger barb removed, they are fairly harmless to people. With their eyes on top of their head and mouth on the bottom, ray appear to gracefully glide through the water. Find out more facts about the ray. 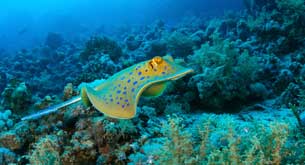 Rays live in warm water, mostly near the bottom of the ocean like this blue-spotted ray