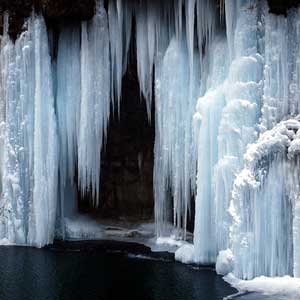 Learn some facts about ice. Even though many liquids can freeze, ice is generally considered the frozen form of water. This is the solid phase of water.

Pure water under normal atmosphere conditions freezes at a temperature of 32° F (0° C) to form ice.

Road maintenance crews use salt on roads when freezing roads are expected. The salt lowers the freezing temperature to about 15° F (-7° to -8° C). Snow and ice melt from roads when the temperatures are higher than this range.

When water turns to ice the volume grows about 8.7 percent. The expanding size of ice is what allows ice to float on water. Expanding ice also causes problems. When water seeps into cracks in buildings, soils or roads and then freezes it expands. This can cause big problems with these items in cold climates. In the spring and late fall, warm temperatures during the day melt ice. At night the water freezes again. This freezing and thawing is the most damaging time of year from ice expansion.

Obviously, people did not invent ice. Ice is a fact of nature on earth, especially in the colder parts of the Earth, near the poles. However, there are inventors who found ways of making ice, even when the temperature outside is warm.

William Cullen from the University of Glasgow was the first to demonstrate artificial cooling, which was the first step to an artificial ice maker. In the late 1800s there were working models of artificial refrigeration, but these machines used toxic chemicals to achieve cold temperatures. In 1928, Freon was developed by Thomas Midgley, Jr. and Charles Franklin Kettering, which brought refrigerated ice boxes to many households.

In 1949 Frank Zamboni patented his ice refinishing machine. Before Zamboni's machine, it took several men hours to scape off the ice marked by ice skates, the pour water to create a new smooth surface. Zomboni's machines are still used today all most major ice rinks. 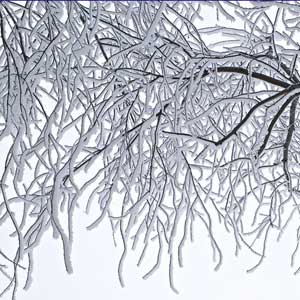