The Earth's surface is made up of soil, water and bedrock. Under the bedrock are layers of solid rock called the earth's crust. The crust has cracks called faults. The pieces of rock in the crust are called plates. The rock plates move slowly over a layer in the Earth called magma. Magma is hot melted rock. The magma can pass through the faults in the bedrock and other weak spots. When magma moves up into the bedrock and soil it runs into water which turns to steam (water vapor). Water vapor builds up pressure underground with the rising magma. When the magma reaches the surface, scientists call it lava. The pressure of the magma and water vapor under the surface can cause a volcano to explode into the sky. When a volcano explodes with a high amount of pressure, it can spread many tons of volcanic ash miles and miles around the area of the eruption. 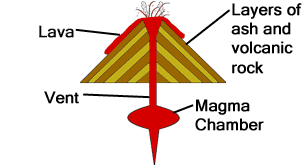 Parts of a volcano 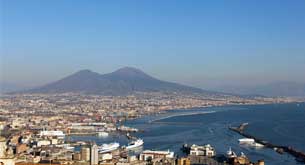 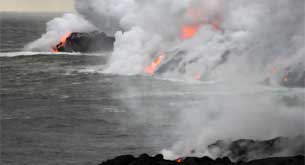 Active lava flow into the Pacific Ocean in Hawaii