Buoyancy Experiment - Teach Kids About the Physics of Buoyancy Forces

Teach kids the principle of buoyancy. Will a metal can magically float on top of water? Is floating due to a magical electrical field or the hydrogen bonding of the water at the surface? Not really. This experiment demonstrates the simple way in which the study of physics is used to determine if an object will float and how much force we can count on the water pushing up on an object that is placed in the water. The concept is simple and even the physics buoyancy equation is simple. 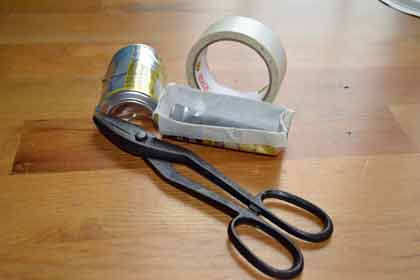 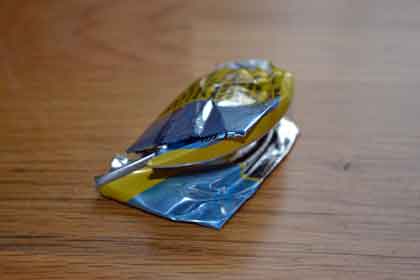 Step 2. Carefully have an adult smash half of the cut aluminum can. Do not touch the exposed cut sides of the can because it will easily cut skin. Avoid leaving any air voids in the can.<

Step 3. Weigh the large container and record its weight. 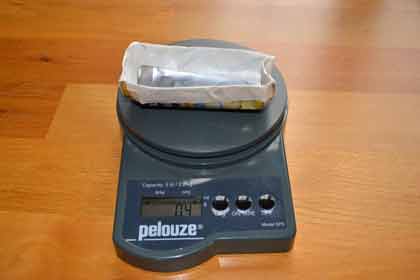 Step 4. Weigh the cut alumium can on the scale in ounces or pounds. The can is light enough that the scale will need to read hundreths of a pound.

Step 6. Fill the water completely to the top in the smaller container. Fill it up slowly until not one more drop can be added.

Step 7. Place the cut aluminum (boat) into the water in the smaller container and allow the water to overtop into the larger container.

Step 8. Use the medicine dropper to remove some of the water from the smaller container without spilling any more water.

Step 10. Dump the water out of the large container and dry it out completely. Repeat Steps 6-9, but this time add some small weights or rocks inside the floating aluminum can. Weigh the water that spilled into the larger container. The weight of the displaced water is the buoyancy force that allowed the aluminum can and small weights to float.

A buoyant force acts on all objects that are either partially or fully submerged in a fluid. The fluid can be either a gas (air) or a liquid such as water. The buoyant force always acts upward on the object. How the buoyant force affects an object is usually conditional based on weight and size of the object and the density of the fluid that is displaced. For example, a buoyant force pushes a rock that lies on the beach upward from the air it displaces. It is not enough force to move the rock. A larger buoyant force pushes upward on the same rock if it were thrown into the ocean. This buoyant force would still not be enough to overcome gravity and it would sink to the bottom. A large piece of steel that is shaped into a boat is much heavier that the rock, but if enough water is displaced by the steel boat, it will float on the water.

In the experiment, an aluminum can was used to demonstrate buoyancy force. Aluminum has a higher unit weight than water. Typically, aluminum weighs about 165 pounds per cubic foot, where water weighs only 62.4 pounds per cubic foot. A solid piece of aluminum will sink in water. This was demonstrated in the experiment by crushing a can and placing it in the water. The aluminum can that is cut in half, however, is able to float on the water. The amount of force can be verified by measuring the amount of water that spills out of the inside water container. From Archimedes Principle, the weight of the water is equal to the buoyancy force that acts on the bottom of the floating can. As more weight is added to the floating can, more water is displaced. This is because more force is needed to keep the can floating at the water surface.

The Archimedes buoyancy equation is: