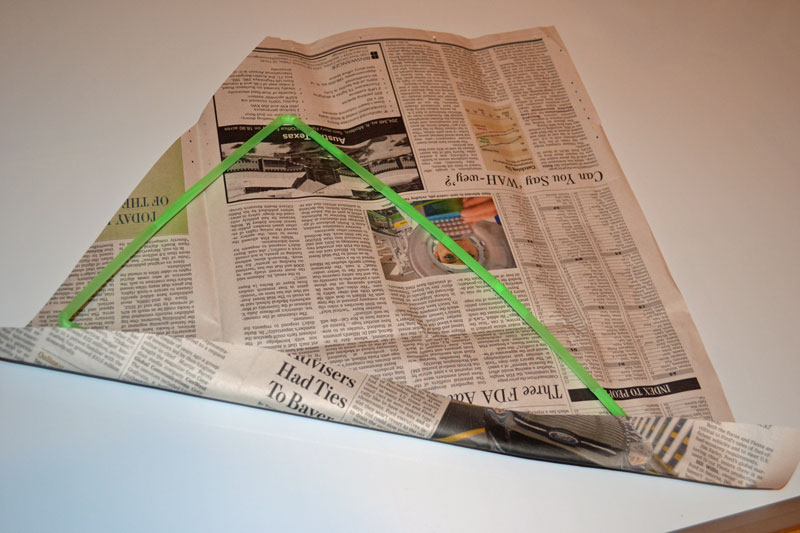 How to Make a Paper Glider - Teach Kids About Flight

An experiment to teach kids about the physics of flight: Long ago, people saw the birds and wondered what it would be like to fly. It took a long time until inventors like Otto Lilienthal, Wilber Wright, and Orville Wright were able to understand the science of flying. This experiment, helps kids to understand why gliders are able to fly.

Step 2. Lay down a full two-page sheet of newspaper.

Step 3. Wrap the newspaper around both sides of the glider frame. Make the paper frame only wrap the frame once, overlapping only if necessary. This will keep the glider's weight low.

Step 5. Hold the front edge of the paper glider and give it a quick push forward making the paper plane fly.

The paper airplane glider is not a traditional paper airplane. The design is more like a glider. Before the Wright Brothers, the discovery of flight was advanced by the German Engineer, Otto Lilienthal. Lilienthal used a glider design to achieve a flight of over 1000 feet, using a fixed wing glider. This was a first for heavier than air flight. Most of the flying vessels at the time used hot air or types of gases lighter than air for flight. Lilienthal studied the birds, and found that the glider wings would create enough uplift force to keep himself off the ground.

The paper glider uses a straw frame for support around the edges. The edge of the glider helps create the aerofoil needed for uplift. This glider, also has a pointed nose since it is so light. The pointed nose helps the very light glider travel fast enough to create the needed uplift. Once the glider slows down, it does not fly very well.