The Sea World location in Orlando is not only one of the top attractions in Central Florida, but also features learning opportunities in marine biology and ocean science. Most traditional aquariums are scaled-down versions of only a portion of the Sea World, fit inside an indoor space. Sea World is an expansive theme park that adds much more detailed exhibits, live shows, thrill rides, and themed restaurants.

Marine biology and preservation of sea animals is one of the highest priorities at Sea World. Many of the animals that are on display at the park have been rescued from the wild. In some cases, the park marine biologists are able to rehabilitate the animals and return them to nature. Here are some of the top locations in the park to view sea animals up close. 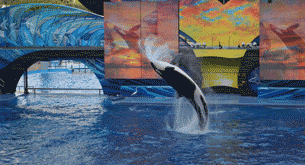 One Ocean Show at Sea World

Like other Sea World locations, Orlando features their famous live orca whale show. Originally made famous by Shamu, Orlando features their own Shamu whales who love putting on a show in the One Ocean Show. The Show is typically performed several times at Shamu Stadium on the far side of the lake. The stadium typically does not fill up because it is so large, but allow extra time to arrive because it is a relatively long walk to the stadium.

Orca whales are also on display at the Shamu Underwater Viewing Exhibit. The underwater viewing is also across the lake, near Shamu Stadium. This is a great place to view the whales, but keep in mind this area may be very crowded after the One Ocean Show. Also, the whales typically are not available for viewing just before and during the One Ocean Show.

With it's Florida location, Sea World Orlando offers one of the best manatee display habitats in the U.S. Their manatee exhibit allows visitors to see the endangered animals up close. The manatees are viewable both underwater and from the water surface. 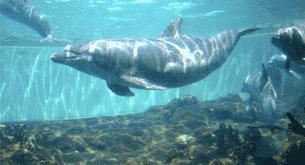 Dolphins are also displayed prominently at Sea World Orlando. There are 3 great locations to experience dolphins at Sea World Orlando. Dolphin Cove offers both underwater viewing and viewing from the water surface. From the surface dolphins are viewable around more than half of Dolphin Cove. Near Stingray Lagoon, the entrance line for dolphin feeding begins. At specified times, guests can purchase dolphin food (usually fish) for a fee. The dolphins are trained to approach guests and open their mouth for a treat. This is a very neat experience, but not surprisingly the lines can get very long, particularly on busy days. If you want to feed the dolphins plan to check the feeding time schedule for the day and arrive in line early. The regular dolphin feeding is also interrupted by Sea World's special tours. If you are waiting in line and the line is not most, it is likely because a tour is passing through the feeding area. The special tours provide an almost guaranteed way to feed a dolphin (weather permitting), but there is a cost. 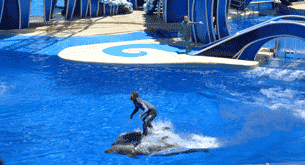 The Blue Horizons Show is another place to view dolphins. In this case, trained dolphins are part of the show. The Blue Horizons Show features a combination of human divers and trapeze artists and trained dolphins. The show designers did a wonderful job of creating a show that fills viewers' senses. Plan to arrive 30 minutes, or more on busy days, before show time to get the best seating. A line for the show starts gathering well before the show starts. The seating for the Blue Horizons show is not as large as Shamu Stadium, so there are not many bad seats, but seating is more limited.

The Dolphin Nursery is the third location in Sea World to observe dolphins. The nursery has a more hidden location with far less traffic than Dolphin Cove. The dolphins in the nursery have all been rescued. They are all in the process of rehabilitation to possibly being delivered back to the wild. The dolphins in this area are a little quieter, but are sometimes very interactive with guests. 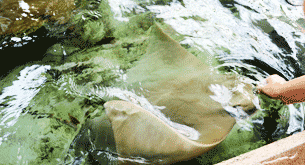 Next to Dolphin Cove is the sting ray touch tanks. Here guests can touch and observe sting rays up close. For a fee guests can also buy some sting ray food (usually shrimp). The rays will glide over your hand and take the food, which is really neat!

Wild Arctic is located across the lake, near Shamu Stadium. It is an all-indoor experience, with plenty of air conditioning, so it is great to visit on a hot afternoon. The Arctic experience starts with a ride to the arctic. For guests who have also visited Disney's Hollywood Studios, the ride experience is very similar to the old Star Tours ride, before it was recently upgraded to the high-definition 3D. There is also an arctic movie without the simulator, for guests who do not enjoy the motion experience. If your party splits up, make sure to make a meeting point after the ride and movie.

There is plenty more to see throughout the Arctic exhibit. Do not miss the beluga whales and polar bears. The exhibit is set up like a simulated Arctic camp where scientists on an exhibition to the Arctic region. There is informational displays and media providing information about the Arctic.

The Shark Encounter exhibit features sharks and other sea animals with teeth. This exhibit is completely indoors (air-conditioning!). Information about the sharks and sea life in smaller aquariums lead to one of the largest marine display tunnels in the world. The walk-through tunnel is a great place to stop and observe sharks in a way that would be be difficult in the wild. 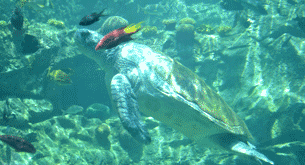 Experience Sea Turtles in Orlando. The Sea Turtle experience begins at an underwater viewing area with some large sea turtles. The underwater viewing areas are the staging area for the TurtleTrek 3D movie experience. The TurtleTrek experience follows the early life of a baby sea turtle and his struggle to stay alive. The movie uses an interesting first-person perspective to tell the story through the eyes of the baby turtle. When guests exit the movie experience, there is also an observation area for viewing turtles from the water surface. The lines for this attraction can get quite long so visit early in the day or find out how to get a quick-pass to skip part of the line and enjoy your day at the park.

The Manta Aquarium is located near the new Manta roller coaster. The Manta Aquarium is actually 10 separate aquariums, placed in a walk through exhibit. Guests will see hundreds of manta rays, different unique fish species, sea horse, and a giant octopus. This exhibit is in a nice location for families of smaller children who do not want to ride the Manta coaster.

The Pacific Point Preserve is a personal favorite at the Sea World Park. The California sea lions on display at this exhibit are entertaining to observe. Kids of all ages love to watch the sea lions as they interact with the Sea World staff and with guests. The Pacific Point Reserve is another location that offers guests the chance to feed the animals. At set times during the day guests can purchase a sea lion snack (usually fish) to feed to the animals. Feeding the sea lions allows guests a very nice experience up-close with the animals. Please remember to check the daily feeding schedule for the sea lions since guests are not allowed to feed them all day.

Antarctic: Empire of the Penguin

Douglas is also an engineer who loves to travel and find science educational opportunities for kids.