The Pittsburgh Science Center, located in downtown Pittsburgh next to Heinz Field, is a great place to take kids when visiting the Pittsburgh area. Parking is available in the science center lot right next to the main entrance. In the fall and winter months, make sure to check the home football schedule, since many of these parking spots will be taken.

The exhibit that makes the Carnegie Science Center a special place to visit is Roboworld. Carnegie Melon University has developed one of the better robotics programs in the United States. The Carnegie Science Center is a beneficiary of this nearby resource. Kids will be able to interact with robots and see some state of the art technology. Roboworld also contains the Robot Hall of Fame. These robots, mostly made famous by television and the movies, catches the eye of most visitors. There are even some famous robots from the Star Wars films in the Robot Hall of Fame. 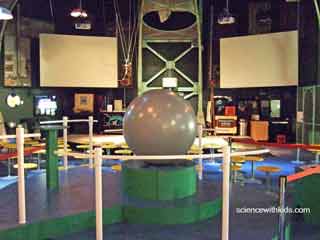 The museum is full of live interactive science demonstrations. There are three locations including the Bayer Science Stage on the first floor, the Kitchen Theatre on the third floor, and the Works Theatre on the fourth floor which all have periodic demonstration which help visitors learn something about science in a fun way. Check the live show times upon entering the museum.

The Carnegie Science Center has two gems which should not be missed. The Buhl Digital Planetarium is a world-class planetarium with a recently updated digital display system. The planetarium is a great place for guests to learn about our universe. If the skies are clear, the observation area is typically open which allows guests to see the rings of Saturn through a 16" telescope. The observation deck also affords great views of downtown Pittsburgh. There is an extra fee of $1 per guest to access this area. The Rangos Omnimax Theatre has regular shows throughout the day including Omnimax movies and laser shows.

An exhibit at the Carnegie Science Center kids will love is Sportsworks, sponsored by Highmarks. Sportsworks is close to the entrance so it is one of the first things you will see when you enter the museum. Sportsworks has three separate sections including Lifeworks, the Physics of Sports, and Sports Challenge. Each area has different sports-oriented hands-on exhibits. The Physics of Sports area can get long lines especially on Weekends and holidays since it looks very fun and is close to the entrance.

The fourth floor contains the Exploration Station, which is one of the most interactive of all the areas in the museum. This area is similar to most good science museums play area with water play, building, some wildlife, and music. The displays in the Exploration Station aim to teach kids something about science in a fun way. This area is over 8000 square feet and has some good views of the river outside, so when the museum is not overly busy there is plenty of room to relax. 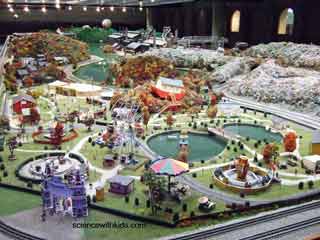 For those who love model trains, one of the more impressive public model train set-ups is on display in the museum. The train display is a look at a Western Pennsylvania railroad from the late 1800s through the 1930s. The train exhibit is called the Miniature Railroad and Village and has been on public display since 1920. It was moved to the Carnegie Science Center in 1992 and continues to be updated. The current train model includes many detailed scenes including a model of the old Forbes baseball field which was the home of the Pittsburgh Pirates from 1909 through 1970 and the Steelers from 1933 through 1963. 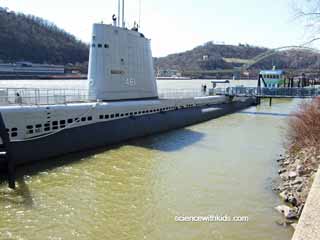 Most admission tickets include access to tour the USS Requin submarine, which is located outside the museum along the River. The submarine was an actual US Navy sub and is now staged with props that make it appear the way it probably did during its service. A trip outside the museum will also give you some great views of Heinz Field, Pittsburg, the inclines, and activity like the duck boats on the river.

Andrew Carnegie helped shape the museum landscape in Pittsburgh. Carnegie's family immigrated to the United States to find better opportunities. Carnegie started from the bottom, but worked his way up and later started the Carnegie Steel Company. His sale of his company to a group that eventually became U.S. Steel, funded his wealth. His generosity to the City of Pittsburgh, eventually led to the modern day Carnegie Science Center.