Learn Science at the Chicago Museum of Science and Industry

What makes a museum or other destination a great place to visit to learn about science? It should be very interactive, be very visually appealing, and provide scientific explanation. In addition, a great place to learn about science should have the repeatability factor, meaning visiting there again and again should never get boring. Based on this criteria, Chicago's Museum of Science and Industry is a a great destination to learn about science. The Museum of Science and Industry (MSI) in Chicago, Illinois is considered as the largest science museum, not only in the United States, but the entire Western Hemisphere. It is also regarded as one of the best science museums in the U.S.. Over 1.5 million guests visit MSI each year, making it one of the highest attended museums in the United States. MSI is a place that provides the best of what a science museum should offer and more. The size of the museum and amount of information within its walls also keeps guests returning.

One of the main missions of the Museum of Science and Industry is to "inspire and motivate children to achieve their full potential in science, technology, medicine and engineering". It appears that those in charge of the museum have worked hard to create a inviting atmosphere that delivers the goals of their mission to visitors.

Science Storms is one of the marquee science exhibits in the museum. Storms has a prominent location which is very visible when entering at the main stairway. Kids can learn the science behind many weather phenomena in this exhibit. The stations are very visual and interactive. The science behind tornados, tsunamis, avalanches, lightning and other incredible weather-related events are available here in a safe atmosphere.

At one time, the state of Illinois was one of the top coal producing states in the U.S.. The coal mine exhibit is a reminant of Illinois' coal glory days. This exhibit was first opened in 1933, the year the museum opened. Visitors today can see the technology of coal mining and experience what it is like to travel underground into a working coal mine. Visitors get a tour of the mines with a ride on a working mine train system. The coal mine tour guide also shows guests technology used for mining safety and products many people use that contains coal. Lines for this attraction can get long later in the day so consider visiting early. 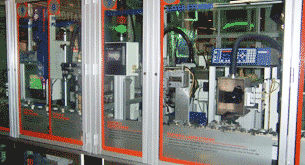 The automated Toy Maker 3000 at MSI

The Toy Maker 3000 is an inspiration for all young makers out there. For a fee, guests can have the Toy Maker 3000 build them a custom gyroscope-like toy. Visitors can follow the progress of construction of the toy through the automated computer controlled pneumatic manufacturing process. For guests who do not wish to buy a toy, there is still full access to view every station of construction of the toys. As the Toy Maker runs out of parts, automated robotic pickers deliever more parts. This exhibit never gets old.

One of the most iconic exhibits in the Museum of Science and Industry is the Transportation Gallery. Thix exhibit is built around many different types of transportation people use every day. At the center of the exhibit is a huge model train display which includes a model of downtown Chicago. As guests visit the airplane walk though exhibit in the 2nd floor, the model train serves as a forced perspective model for people looking out the airplane passenger windows. It appears that you are actually at a very high altitude. The transporation area includes scientific information on steam-powered transportation to modern gasoline-powered race cars.

The Henry Crown Space Center is in the lower level of the museum, near the entrance to the Omnimax Dome Theater. This area is a little out of the way, but worth finding. The space center highlights rocket and spacecraft technology developed during the space race between the U.S. and Russia. The visual displays are fantastic. This area was recently updated to include more interactive displays and a section on the future of space travel. Kids who are interested in the science of space and rockets, will love visiting the Henry Crown Space Center.

The top things for younger visitors to see in the museum as the Idea Factory, Farm Tech, and the Baby Chick Hatchery. The Idea Factory is one of the best areas in any museum for younger kids, construction, water play, pretend play, and more are all here. At Farm Tech kids can learn about the science and equipment behind farming. Kids can even climb inside a real John Deere Tractor and Combine. Kids of any age will want to visit the baby chick hatchery, where each day new chicks hatch.

More About the Museum of Science and Industry

These exhibits only highlight a few of the many things to see at Chicago's Museum of Science and Industry. There are also major exhibits that on display that only stay for a set time in the museum. These exhibits typically are worth visting the museum, just to experience all they have to offer. In addition, to the highlighted permanent exhibits and temporary exhibits some of the other things to see at MSI include the U-505 German submarine, the Swiss Jolly Ball, the Omnimax Theater, Earth Revealed, the Silver Streak Train (Pioneer Zephyr), Networld, You! The Experience, and much more!

Located on the east side of downtown Chicago, east of Chinatown, the easiest way to access the Museum of Science and Industry from downtown is Lake Shore Drive. The museum accepts the CityPASS discount card. They also offer discounted tickets for City of Chicago residents. Keep in mind that the museum also offers over 50 free admission days to State of Illinois residents each. This is a great program for Illinois residents, but crowds may be higher on these days if you are visiting from out of state. Check the museum's website for the days when free admission is offered to plan your trip.