Memorial and View of Landing Fields

Visiting Kitty Hawk, North Carolina, the location of the Wright Brothers' historic first flight offers more than a view of history. The artifacts and information contained here provides a look at Wilbur and Orville Wright's steps towards scientific discovery of the world's first airplane.

The Wright stone monument is a way-finding marker for the Kill Devil Hills and Kitty Hawk areas of the Outer Banks. With the flat topography of the area, the Wright monument is viewable for miles. Set on top one of the original sand dunes in the area, the elevation of the monument provides a great overview of the take-off and landing areas of the Wright Brothers' first flights. The entire grounds were previously natural sand dunes. When the monument was built, the National Park Service introduced vegetative ground cover to keep the shifting sands in place. This was to protect the monument and to maintain the integrity of the original sand dunes. The Wright Brothers Memorial Park now maintains the shape of the old dunes and flight area, but there is no longer sand at the surface like the historic photographs show. To get a modern-day look at what the original sand dunes may have appeared like, drive a few miles to the south to Kill Devil Hills to Jockey's Ridge State Park. Jockey's Ridge has some of the largest sand dunes in America, East of the Mississippi. Visitors go there to fly kits, see the sunrise and sunset and sandboard down the sand bluffs. There is also a school where visitors can learn to fly a hang-glider down a sand bluff (for a fee). The winds off the Atlantic Ocean give you an understanding of why the Wright Brothers chose the Outer Banks to test and fly their gliders and airplanes. 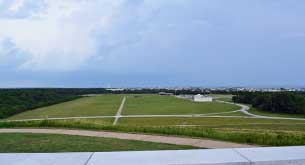 The view from the Kill Devil Hill provides an excellent overview of the first flight take-off and landing area. 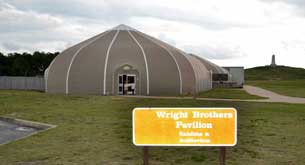 The Wright Brothers Pavilion is full of information about the discoveries of Wilbur and Orville Wright.

The two buildings that look like small airplane hangars are the Wright Brothers Pavilion. Inside the pavillion are some excellent things to see to learn about Orville and Wilbur and how they had to develop many new ideas to invent the first airplane. The Wright Brothers built their own wind tunnel to test different wing designs. A replica of their 1901 wind tunnel is on display at the Wright Pavilion. A wind tunnel just like this one was very important for development of the wing uplift needed to fly. Also on display at the museum is an engine block from the original 1903 flyer. Wilbur and Orville new they needed plenty of engine horsepower to give their airplane enough power, but also they needed a light engine. The tried to ask people in the car industry for engines to use, but were not successful. The Wrights soon realized they would need to design and build their own engine. The brilliantly also discovered that an engine made out of aluminum is a perfect choice for a light engine.

The pavilion also hold much more information, photos and videos about the Wright Brothers and progress they made on the aircraft from the period of time from 1901 through 1903. There is also a replica of the original 1903 Wright Flyer and a replica of their 1902 glider. In the back hangar there is an very interesting Wright Brothers movie, that is also informational and allows some break time for kids from walking and standing. 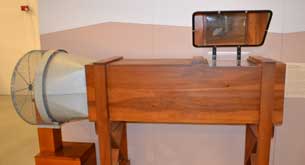 A replica of the 1901 Wright Brothers Wind Tunnel is on display at here. 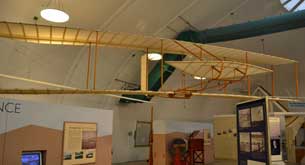 Replicas of the 1902 Glider and the 1903 Wright Flyer are on display here. 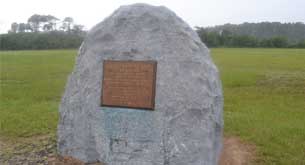 This monument sits at the exact location where the first airplane took off.

On the northwest side of the Memorial Park are the actual locations where Orville and Wilbur Wright first flew their 1903 Flyer. The large stone monument is the location were the first flight lifted off the ground. The monument reads "The first successful flight of an airplane was made from this spot by Orville Wright December 17, 1903 in machine designed and built by Wilbur and Orville Wright."

There are also markers for landing locations for the first 4 flights of the 1903 Flyer. Each marker is noted with the flight number. This location is an education experience in itself. It is one thing to read about the Wright Brothers first flight, it is entirely different standing in the real location with the breeze blowing in and understanding the actual distances between the markers.

Next to the flight area are two replica building representing the structures that Wilbur and Orville would have used to put together and rebuilt their Flyer after flight attempts and where they lived during this time. They tested their aircraft at this location from 1901 to 1903.

The first successful flight of an airplane was made from this spot by Orville Wright December 17, 1903 in machine designed and built by Wilbur and Orville Wright. 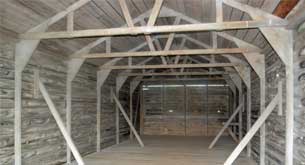 Inside of the replica building where Wilbur and Orville Wright worked on their airplane. 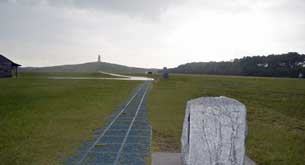 The take-off and landing area of the first flights of the Wright Brothers are here.