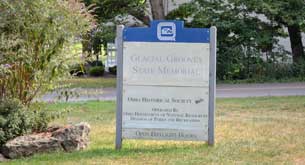 Getting to Glacial Grooves State Memorial

The Glacial Grooves State Memorial is located on the north side of Kelley's Island, very close to the public beach and State campground. Kelley's Island is almost due north of Cedar Point, however, Lake Erie separates the two. Visitors to the island can look out and see the Cedar Point amusement park easily from the south side of Kelley's Island. To reach Kelley's Island there are three public options for transportation. Private docking and chartered trips are also available to Kelley's Island. The Jet Express has seasonal trips from both Port Clinton and Sandusky. The Jet Express leaves Port Clinton from the west side of town. If you drive west through Port Clinton on State Route 163 the Jet Express parking is on the left, just before crossing over the lift bridge (you can't miss it). The Jet Express leaves Sandusky, Ohio at the Sandusky Ferry Terminal. Parking is located in various lots around the terminal. The Ferry Terminal is located west of Cedar Point on East Shoreline Drive, 3 blocks north of U.S. 6. The Jet Express dock on Kelley's Island is further north on the Island than the main dock. Miller Ferry also operates ferry service to the island. Miller leaves from the north side of Marblehead on State Route 163. When traveling east on SR 163, the parking is on the left. Miller ferry boats dock at the main dock on the south side of the island right next to Inscription Rock (Indian artifact).

Keep in mind that the Glacial Groves are located a few miles from either dock on the north side of the island. Miller's has ferry service for vehicles, bikes, motorcycles. They will also take people without vehicles. Jet Express has passenger transportation only. Visitors will need to rent a bike or powered golf cart when arriving on the island if they do not have transportation. There are rentals available at both dock locations. 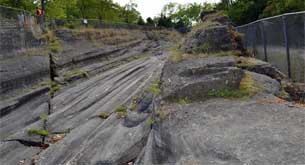 Unless there was a ancient civilization more advanced than our own before the Ice Age, we can learn something from the glacial grooves. The Glacial Grooves are tracks left from a huge continental glacier moving from Canada to the United States. Scientists estimate that the glacier was at least 1 mile (1.6 km) thick at this location. At some point in the past, the summer period grew shorter and the winter was longer. This was long before people made claims of global warming or man-induced climate change. Each year the amount of snow was greater than the amount of snow that melting resulting in a larger and larger build-up of snow. Over the years, the pressure of the thickness of snow resulted in compressed ice to form at the bottom of the pile of snow. As the height of the snow build-up, it caused instability. The mass of ice and snow moved as snow and ice behind it pushed it out. The extreme pressure and friction at the bottom was powerful enough to carve through solid rock. The Glacier Grooves at this location were one of the results. 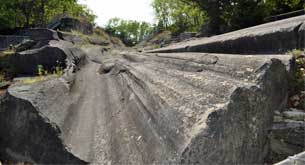 The Kelley's Island Glacial Grooves are up to 15 feet deep. 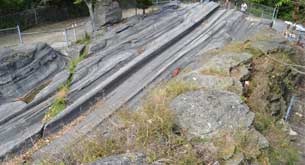 Evidence of the Glacier is in plain sight, but what else can you see in the rock? 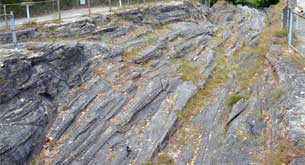 The remaining Glacial Grooves at the State Memorial are 396 feet long. The grooves in the dolomite are up to 15 feet deep and 25' to 30' wide. If you look closely there are fossils in the bedrock. Also the patterns of the grooves tell us some things about the glacier. The direction of the grooves indicate the direction that the glacer was moving. Also there are rounded spots on the bottom, possible where either the bedrock is harder or where the glacier encountered a snag point where the remaining glacial flow went around an area. There are other smaller glacial grooves visible around Kelley's Island. If Lake Erie were drained and the mud removed would we see more glacial grooves along the bottom of the lake?

History of the Glacial Grooves on Kelley's Island 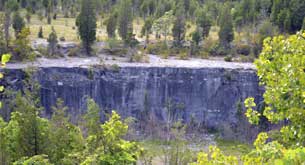 The large rock quarry located next to the Glacial Grooves

At one time Kelley's Island had a much larger glacial groove area. They were called the Great Grooves and they were over 2000 feet in length. Kelley's Island was once a thriving rock quarry resource. With its location on Lake Erie, rock and products made from the limestone were transported by boat throughout the great lakes area, up to Canada, through the Saint Lawrence Seaway to the Atlantic Ocean and up the Erie New York canal and Ohio canal system. Decorative cut bedrock for buildings, burned limestone to make lime and crushed limestone flux needed for steel production were all products that were delivered from Kelley's Island quarries. Unfortunately, the Great Grooves were also destoyed to provide these products. Quarrying on the island peaked in 1918. At this time only a small section of grooves about 35 feet long was exposed. In 1932, the Ohio Historic Society created a memorial to the Great Grooves. For a long time after it was thought that the 35 foot section was actually longer. In 1971 a test section was excavated and sure enough a longer section of glacial grooves was in fact buried. In 1972, more excavation was commissioned and the present-day length of 396 feet of glacial grooves was unearthed. The current 3.5 acre state memorial is free to the public and allows visitors to get very close to this beautiful rock feature. There are a series of informational signs around the grooves to explain some of the known scientific data. The old rock quarry is still easy to see behind the State memorial .

There are numerous rock quarries around the area. If you took the Miller Ferry from Marblehead you may have noticed the LaFarge rock quarry there. If you look at an aerial photo online, the massive size of this quarry is visible. All of the soil on top of the bedrock around the area was deposited after the Ice Age. In some areas, there is fine black volcanic sand on top of the bedrock. This sand did not originate from this area, but further north in Canada, where there are ancient volcanoes with black igneous rock. The Lake Erie Islands, including Kelley's Island and Middle Bass and South Bass Islands offer some very unique geology pieces of information about the glaciers and how they moved through this area. 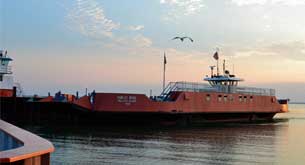 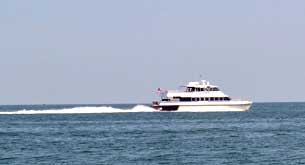