Visiting the Columbus Zoo and Aquarium

One of the best zoos in the United States is located in the midwest city of Columbus. The Columbus Zoo and Aquarium offers visitors with a rich experience. The zoology celebrity Jack Hannah and the staff have made the Columbus zoo one of the top zoos in America. The Columbus Zoo is an expansive zoo located on the north side of the city of Columbus. The Columbus Zoo and Aquarium is more than only a zoo, it also includes features of an aquarium, the Zoombezi Bay outdoor waterpark (summer only), Jungle Jack's Landing ride park (seasonal) and additional seasonal midway and adventure rides throughout the zoo. The rides have an extra charge, but add a little different experience than a regular zoo. The zoo is organized by different world locations that match the style of architecture that resembles the locations where the animals live. There are both outdoor areas and indoor spaces to give visitors a better experience through different weather conditions. Find out more about some of the featured areas of the Columbus Zoo.

Closest to the main park entrance is North America. This area has animals found in North America, Mexico, USA, and Canada. Boars, fox, moose, reindeer, bear and more animals are on display here. Surprisingly, wolverines are also on display in North America. I wonder if the Ann Arbor parks feature a buckeye tree. North American also contains an Arctic display with above ground and underwater polar bear viewing. The North America Area has several food Choices such as pizza and burgers. Ride choices in North America includes pony rides and the express train, which require ride passes.

Next to North America is Asia Quest. Asia Quest is home of many of the largest animals in the Columbus Zoo including the Asian elephants and black rhinos. Asia is also home of the big cats including the Siberian tigers and African lions. The interactive center In the middle of Asia Quest has some interesting things to see. !!!Asian bath snakes and a water monitor giant lizard!!! 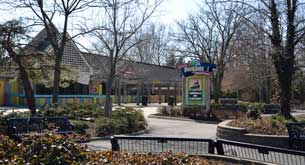 The path to the back half of the zoo, including the aquarium, passes through the Conservation Lake area before traveling under the state route 257 tunnel to the aquarium area. Conservation Lake has the Animals on Safari Show. This show is very entertaining and features rescued animals who are being trained for a television show. It is also has the largest gift shop in the zoo, bathrooms and snack shops. The zoo birthday parties are also hosted in this location. The lake area is typically decorated seasonally or for the zoo's latest promotion

The aquarium features Discovery Reef, which is a 100,000 gallon saltwater aquarium filled with sea life including sharks and rays. There is a multi-tier viewing and standing area to be able to view and get photos of the sharks and other sea creatures in the Discovery Reef. There are also smaller tanks to view marine life and an open pond with fish. As you exit the building, the pump and filtration system for the aquarium is viewable which is also a learning experience. 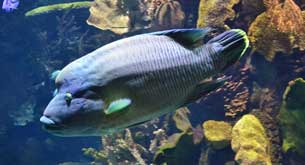 The 100,000 gallon aquarium is one of the top attractions at the Columbus Zoo

Next to the aquarium building is Manatee Coast. This indoor manatee habitat is one of the highlight's of the zoo. You will need to travel to Atlanta or Florida to see a manatee exhibit even close to the quality as Manatee Coast. The Columbus Zoo is very active, working with Sea World and other agencies to try to save manatees in Florida. Their knowledge and care of these animals is very evident when visiting Manatee Coast. 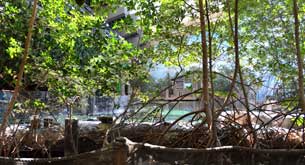 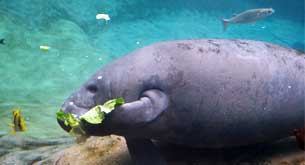 See the manatee in their large tank in the Manatee Coast

The Aquarium and Shores area also features animals such as tortoises and alligators on display seasonally. There is also the outdoor penguin exhibit and the indoor reptile building featuring snakes, lizards and other reptiles. The Grand Carousel pavilion is also located in the Aquarium and Shores section. 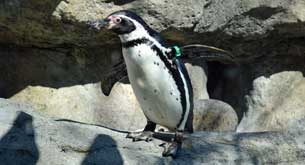 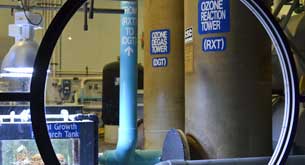 See the filtration system inside the Columbus Zoo Aquarium

Austraia and the Islands 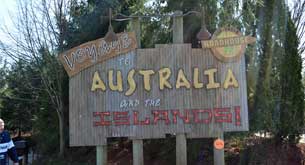 Entrance to Australia and the Islands

Austraia and the Islands is also a nice section of the Columbus Zoo. It features one of the kid's favorites at the zoo, the Kangaroo Walk about. Kangaroos here roam freely so you can get some great photos. If you are able to go to this area when it is not very crowded, the kangaroos are typically much more active. When there are a lot of visitor they tend to be shy and will move away from the paths. The Australia area also features Gibbons, orangutans, Komodo Dragons and koalas. There are two unique attractions in the Australia area worth pointing out. Bob and Evelyn's Roadhouse features an authentic looking Australian roadhouse in the front. The main part of the building features various nocturnal animals. It is a good place to visit on a cold or hot day. Second, one of the best rides in the park is located in Australia. The Islands of Southeast Asia Boat Ride features and enjoyable boat ride with viewing of animals and scenery. If the kids need to run and jump a bit, try the Wings 'n' Playthings park, which is a big playground located in the Australia area. 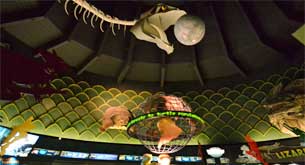 There are many in-depth building and exhibits in the Columbus Zoo for kids to learn something about science.

Teaching kids about animals and marine biology is the largest reason to visit the Columbus Zoo. It is very evident that the staff at the Columbus Zoo is very knowledgable about the animals. Talking to a zoo guide or stopping to look at one of the many informational signs at the zoo is a great way to expand kids knowledge base not only about the animals, but also the habitat of the location where the animals live.