Smithsonian Air and Space Museum at the National Mall 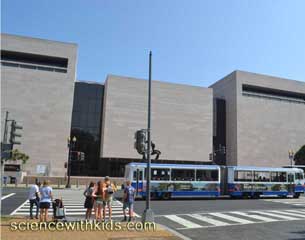 The Entrance to the Air and Space Museum in Washington D.C.

Overall, the Air and Space Museum contains over 20 themed rooms or sections on two floors. In addition, there are many hanging aircraft that offer an extension to themed sections. Always look up from the first floor, and look down from the second floor as each view offers a unique view of the objects on display. There is also a flight simulator room (extra fee), which is very popular with kids of all ages. There is also an IMAX theater (extra fee) and a planetarium (extra fee) that offer an audio-visual experience for audiences. Considering that the Smithsonian Air and Space Museum has free admission, adding one of these experiences is not a bad idea if you want to sit down and relax during a show.

Highlights for Science Kids at the Air and Space Museum 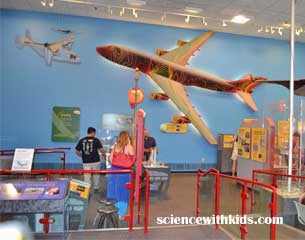 How Things Fly is an entire section at the Air and Space Museum dedicated to teaching kids the science of flight through interactive displays. The How Things Fly area contains hands-on stations to teach kids about gravity, jet and rocket engines, the physics of air flow, how to fly an airplane and more. There are live science shows throughout the day including experiments and fun demonstrations. Also, there is a flight simulator and real airplane cockpit where kids can pretend to fly. The How Things Fly area gets crowded during the morning hours and early afternoon. Typically, the best time to visit is during the last few hours the museum is open. 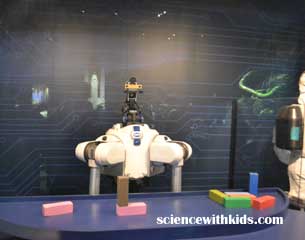 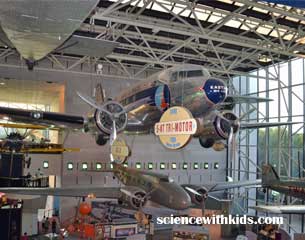 America by Air at the Smithsonian Air and Space Museum

America By Air is an area that concentrates on passenger air travel. Kids enjoy this area because there are a few cockpits/airplanes that the museum allows guests to walk-through. Kids can go through an actual Airbus A320 and the nose of a Boeing 747 aircraft. There are also some important passenger aircraft hanging from the rafters of the museum in this area. Some aircraft to notice include the Ford Tri-motor and the Boeing 247-D.

The Wright Brothers & the Invention of the Aerial Age (Room 209)

The Wright Brothers & the Invention of the Aerial Age (Room 209) may be popular with science kids. It may not be the most exciting area of the museum for kids , but they should not miss seeing the original 1903 Wright Flyer. The 1903 Flyer is often replicated in other museums around the world, but kids should see the actual airplane that made history by becoming the first airplane to fly. People around the world come to the museum to see this airplane. If you are visiting, do not miss the original airplane, particularly if you do not visit Washington DC frequently.