Steel is one of the most common metals used in the world. Steel is very popular because of its strength and low cost. Building frames, ships, automobile frames, bridges and much more are built from steel. In the U.S. alone, about 6.4 million tons of structural steel was used in 2012. That is over 40 pounds of structural steel for each person living in the United States. 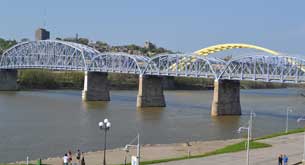 Most large bridges are made from steel

The History of Steel

Steel alloy is made from iron ore. The production of steel was preceded by the production of wrought iron and cast iron which is also made from iron ore. Iron was one of the first metals used in modern construction. Cast iron, because of its high carbon content is a strong material in compression, but is not very ductile (flexible). It is considered too brittle of a metal for use in structural steel. Wrought iron has a low carbon content and is ductile, but lacks hardness needed to make efficient structures. In order to design strong wrought iron beams to support loads over a long span or support loads in building columns, heavy, thick beam shapes were required. 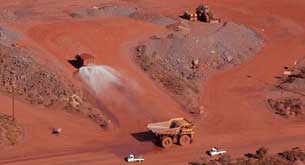 In the 1700's it was discovered that by reducing the impurities and adding carbon to wrought iron, a new metal alloy called steel is produced. Steel was first produced by bundling iron with charcoal powder and then heating. The iron absorbed some of the carbon, producing a stronger material that was called blister steel. In the 1740's Benjamin Huntsman discovered that by heating the blister steel at higher temperatures and removing the slag by using additives, a more pure steel with much better quality was produced. This process created good steel, but it was very time consuming and expensive to produce large amounts of steel this way.

The discovery of steel did not originally change the way building and structures were designed, but in the 1800's another discovery changed everything. The English Henry Bessemer is credited for creating a process to produce inexpensive steel. The Bessemer process uses forced cold air to remove silicon, carbon and other impurities from the metal allow, resulting in structural steel. Steel is much more ductile than the brittle cast iron, but with much more strength than wrought iron. The ductility and tensile strength of steel helps it support loads in the middle of a span. The additional strength and lower cost of the material resulted in a large shift of designers using steel for structural design or their projects. 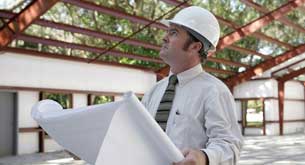 Steel is a popular material with designers

Designers consider the strength of steel in two ways, including yield strength and ultimate strength. For a specific range of stress steel is considered "plastic". This means that when the load is removed, the steel returns to its original shape. The yield point is the stress which causes the steel shape to change slightly, even after the load is removed. The ultimate strength is the highest amount of tensile stress the steel can accept. At this point, more load will only result in more deformation of the steel.