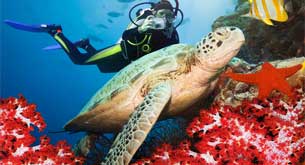 Huge Sea Turtles are a wonder to watch in the ocean

How Many Types of Sea Turtles Are There?

Olive Ridley Sea Turtles Olive Ridley sea turtles are known for their olive-color, heart-shaped shells. They also have the longest flipper of any sea turtle which makes them easily recognizable. They are small sea turtles, similar in size to the Kemp's Ridley turtles.

Kemp's Ridley Sea Turtles: Kemp's Ridley turtles are the smallest species of sea turtle. Adults can reach a weight of up to 80-120 pounds. They live most near Mexico in the Gulf of Mexico, but are also found in the Atlantic Ocean from Florida and as far north as new England during late summer. Possibly because of their smaller size, Kemp's Ridley turtles spend a majority of their life in the shallower waters near the coast of land. Their main diet consists of crabs with some smaller ocean animals and plants.

Loggerhead Sea Turtles The Loggerhead sea turtles are known for their large heads and unique patterned skin. They can grow as large as 500 pounds. They live mostly near the oceans near southeast U.S.. When Loggerhead turtles are younger, they live in the open oceans, but return to shallower waters, near the coast, when they reach maturity. 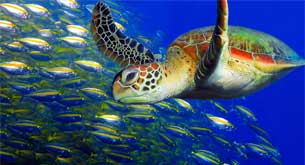 Green Sea Turtles: Green sea turtles are the largest of the hard-shell turtles and can grow up to 500 pounds. They mainly eat sea grass and algae. Green sea turtles live in warm waters in subtropical and tropical areas. The green sea turtle is named after its sometimes green skin color and green algae that grows on its shell. 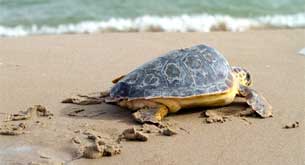 Sea Turtles are vulnerable when they nest

Sea turtles were once plentiful in the oceans, but because of turtle hunting, fishing, and destruction of beaches where they nest, all 7 types of sea turtles are endangered or threatened. There are some actions people can take to try to help limit damaging turtles nesting areas and limit other things that can harm sea turtles.