Pennies have a copper coating that when new looks very shiny. As the copper gets older, it reacts with the oxygen in the air and begins to form a copper-oxygen compound. This compound makes the penny look dull brown. This experiment helps to teach kids how to use the phosphor content in Coke or Pepsi to clean pennies.

Step 1: Pour a couple of inches of Coke or Pepsi (any dark cola will work) in the bottom of a disposable cup. 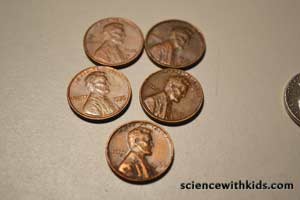 Step 2: Using the permanent marker, mark an X on one side of several of the pennies. Record which pennies that were marked by writing down the year of each penny.

Step 3: Drop a few pennies in the bottom of the cup. Most pennies that were minted before about 1982 have much more copper content than newer pennies. It is fun to try some newer pennies and a few older pennies to experiment with the results.

Step 4: Let the pennies sit in the cola overnight.

Step 5: Pour the cola down the drain, leaving the pennies behind. Never drink the cola used in this experiment. The residual copper left in the cola can make you sick. Also, throw away the cup after using it for the experiment.

Step 6: Compare the pennies used in the experiment to other uncleaned pennies

Dark colas like Coke and Pepsi actually contain phosphor in the form of phosphoric acid. This acid breaks down the copper-oxygen compound chemical bonds allowing a fresh unoxidized layer of copper to be exposed. The copper which is removed from the surface of the pennies ends up in the cola in the form of copper ions. Another great experiment to make use of copper ions removed from pennies can be found in the Copper Plating Experiment.